The Jobs of the Future – Got Robots?

Home » The Jobs of the Future – Got Robots?
Previous Next

The Jobs of the Future – Got Robots?

How about a robot that helps you do the dishes and take them out and help with some small chores at house? Yes sir sure, please hand me one now! I am so ready to save that even one hour work around the house (that I would rather not do) and most importantly the mental peace that accompanies such a possession – I don’t have to worry about the vacuum and dishes anymore and it will be on my time as and when I program my house robot. Hey, and the good news is- they are already ready to put such a helper on sale: 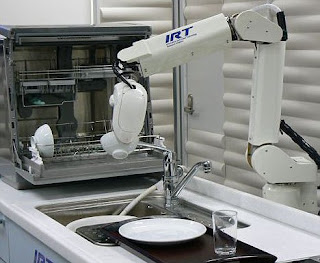 According to the Telegraph

A new household robot created in Japan is capable of rinsing the dishes in the sink before neatly lining them up in the dishwasher and pressing the start button for the washing cycle.
The multi-jointed robot arm, created by scientists the University of Tokyo with the electronics company Panasonic, is one of a series of prototype devices designed to perform household chores.
As home to one of the world’s fastest ageing populations, Japan is experiencing a boom in robotic developments, with the market currently estimated at £5.3 billion (Y712.3billion) and poised to boom to £71.7bn (Y9.63 trillion) by 2030, according to the Japan Robot Association.
A growing number of companies are investing heavily in the future of household robotics, many of which are designed to assist daily life for the elderly as well as the infirm.

Since this robot would be in sale in less than 5 years from now, there you go something to think about, if people are ready to buy this robot what other products could be linked to such a technology, start thinking about it now and you have a well in demand product or service 5 years from now.

And more happenings in the robotic world – according to technewsworld:
iRobot is one company that helped to make robots part of our everyday lives. There’s the Roomba, which is an automatic vacuum cleaner, and the Scooba, an automatic floor washing system. Then there’s the pool-cleaning Verro and the gutter-cleaning Looj.

Honda has also been working on a humanoid robot project called “Asimo.” Still in the development phase, Asimo can carry trays, push carts, climb stairs, and do a number of other tasks. In the future, it might be used to care for the elderly, provide service at social functions, and do simple housework. It is also being developed to work in conjunction with other appliances.

The future is now; it will be what you plan of it today.
But if you want to be successful there we better start doing something now. Look up where the investments are being made and what products and services make the world a better place.
Recessions come and go don’t brood over it, think future think positive and get creative.

What is your prediction of a product or service much in demand in future?