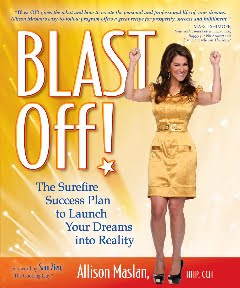 You have heard the story many times. What seems to be a tragedy, such as in an illness, job loss or divorce ends up turning to triumph when the person ends up making drastic positive changes through their forced set of circumstances.
Many have found themselves jobless in these trying times, frightened and wondering what to do next. The interesting twist is that a large percentage of those laid off have often said that they did not “love” their job. The job has represented security, which is of prime importance, however, in many cases, their work was not completely satisfying or fulfilling. In fact, a study prior to this economic downturn showed that 87% of people polled disliked their jobs. Since we spend approximately 75,000 hours at work from age 25 to 65, this seems to be an even sadder circumstance than a difficult job market.

Connie Delonge, president of Breakthrough Grief Recovery, wanted to start her own business for a very long time, but was afraid to take the leap and leave her job. She had been in the mortgage business for years for financial reason’s only. “It is very stressful work and even though I am good at it, it was never very fulfilling for me.” Connie’s true passion has been grief recovery support which she had been doing for years on a volunteer basis through Horizon Hospice of Poway, California.
“This economy forced me to find a new way to pay the bills. My gut was telling me that at this point in my life, I could no longer work at a job that was unsatisfying. Life is too short to not go after your dreams. My life coach, Allison Maslan, helped me move past my fear of becoming an entrepreneur, and then supported me in laying out a step-by-step strategic plan to create my own grief counseling business. I have not been this excited about my life in years.”
Connie is just one example of many individuals that are taking advantage of a challenging time and turning it into an opportunity to take the entrepreneurial leap. Slowdowns don’t have to be roadblocks to starting new businesses, experts say.

It might seem counter-intuitive to start a new business when the economy is flailing, but a recession can actually be the ideal time for launching a new enterprise. In fact, many well-known and successful organizations were born during hard times because it is often easier to start a new company than find the right job during a recession.

Here are some examples of companies that laid the groundwork of their enterprise during tougher economic times. Hyatt Corporation opened its first hotel’s doors at the Los Angeles International Airport during the Eisenhower recession (1957 to 1958). Bill Gates and Paul Allen launched Microsoft during the recession in 1975. CNN started its humble beginnings as a little-known station called The Cable Network News during the 1980 recession. The Fortune 500 is full of companies that were founded during down times: from Johnson and Johnson, to Disney, Cisco and Intel.

Prerna O’hara, president of Your Company Concierge has been working with the Blast Off Program over the past several to months develop her dream business. She was also employed as the Concierge/Patient Liason for a San Diego medical and day spa. When they let her go due to the down economy, it was the perfect excuse for Prerna to speed up the pace of her new business launch. She is taking the expertise she offered her employer and putting it to work for herself.
“I may have taken longer to get my business up and running, so losing my job has actually motivated me to open for business now. As Allison has said, poverty is a great motivator and failure is not an option! I have had so much fun putting all of this together. I am so passionate about my new business and I am dedicated to making it work.
A recession can offer many advantages to a budding entrepreneur including, lower rents, better deals with suppliers, and employees are often willing to start in for less.
Often the worst of times can end up being an opportunity for the best of times, just as turning lemons into lemonade could be your most profitable and satisfying venture.
If you have a vision, go for it. It is never going to be the perfect time to go after your dreams. But if you don’t do it now, years could pass and you may find yourself saying, “Why didn’t I?”

Allison Maslan, HHP, CCH has been an entrepreneur for the past 25 years and has a vibrant array of nine successful businesses to her credit. She is an author, life and career coach, homeopathic physician and international speaker. Allison is the president of The Blast Off Life and Business Coaching. Through her years of working with thousands of clients on a one-on-one basis, she has come to understand how and why human beings create their own personal limits in every aspect of their lives. Her Blast Off One-on-One Coaching Program and Blastation Interactive Life Coaching Software help people tap into their passions, learn to release their self-limiting roadblocks, and guides them through a step-by-step flight plan for success and fulfillment in all areas of life. www.myblastoff.com 888-844-3550