US Recession and the Global Economy – Snapshots from the Media

US Recession and the Global Economy – Snapshots from the Media 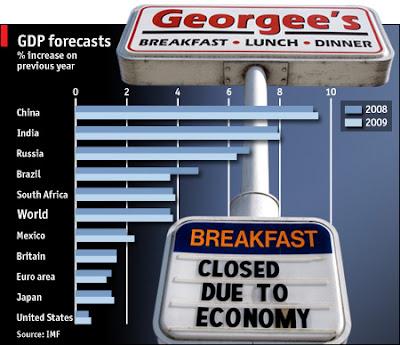 Job Cuts Maximum in last 2 Years in the US – recession fears are evident on the present US economy and global repercussions are not far behind, though already visible in some countries.
According to a recent report in the San Jose Mercury News: In March, construction companies cut 51,000 jobs, factories eliminated 48,000 positions, retailers cut payrolls by more than 12,000. Professional and businesses services lost 35,000 jobs and temporary help firms cut nearly 22,000 jobs. Financial firms chopped 5,000 jobs.
When government hiring was removed, the numbers looked even worse. Private employers shed 98,000 jobs in March.

Will US lead a global recession this year or the thriving economies of China and India can ride it out on their own?

Here are some snapshots from the print media around the world:

Economy is in recession, Bloomberg economist survey says:
The world’s largest economy will contract from January-June 2008, according to the median of 62 economists surveyed from April 2-8, 2008, Bloomberg News reported. A majority now predicts that the U.S. economy is, or will soon be, in a recession.
Economist Glen Langan, who did not participate in the survey, said Wednesday that aside from the oil / oil services sector and agricultural exports, there’s little that’s positive about the U.S. economy right now.
The IMF reckons that there is a 25% chance of the world economy growing by less than 3% in 2008 and 2009, the equivalent of recession, in its view. The origins of this crisis lie in the biggest asset bubble in history; financial markets have already suffered arguably their biggest shock for 80 years; and America is not the only developed economy suffering (Britain’s housing market, for instance, is showing the same symptoms as America’s—see article). But so far at least there is little evidence that the world economy is falling off a cliff.

The World Bank‘s just-published report, Global Economic Prospects 2008, predicts that the economies of developing countries like China and India “will play a crucial role in preventing the global economy from suffering a hard landing this year as the impact of the U.S. slowdown and turmoil in the credit markets continue…as those countries are taking over the baton of growth in the world economy.” (Guardian; World Bank’s report available here.) (Source: sfgate.com)

An article from China-based McKinsey & Company consultants reports: A slowdown in the U.S. economy won’t have that much impact on China’s continued fast-paced growth. Domestic demand in China, led by the upswing in construction, investments in infrastructure, and strong consumer spending, will keep the economy moving along just fine. The export sector in China, when measured as value-added, contributes about 9 percent to GDP, according to UBS analysis, and employs about 7 percent of the workforce. Reduced demand in the U.S. could result in slower growth for some Chinese manufacturers, and perhaps trigger some employment pressure, particularly on China’s east coast. But the overall impact is unlikely to be major.

In an article in Harvard Business, the author B V Krishnamurthy says: It would be naïve to imagine that a recession in the United States would have no impact on India. The United States accounts for one-fourth of the world GDP and any significant slowdown is bound to have reverberations elsewhere. On the other hand, interdependencies between the US economy and emerging economies like India and China has reduced considerably over the last two decades. Thus, the effect may not be as drastic as would have been the case in the 1980s.
Much has happened between then and now. The Indian economy has shown a robust and consistent growth trajectory and the projection for 2008 is 9%. Indian exports to the United States account for just over 3% of GDP. India has a healthy trade surplus with the United States. In other words, the effects of this recession on India may be quite distinct from those of the past.
He presents some interesting statistics in support of the statement.